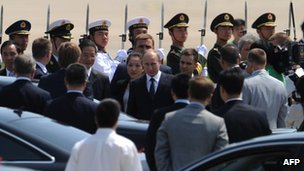 Russian President Vladimir Putin is beginning a three-day visit to China, with energy and foreign policy expected to dominate the agenda.

Mr Putin said ahead of the trip that he wanted to further boost booming bilateral trade, which reached $84bn (£55bn) last year.

The Syrian crisis is also expected to be discussed during the talks.

China's envoy to the UN, Li Baodong, has described Syria as one of the most pressing issues on the agenda of the Security Council.

Learn more on the BBC News