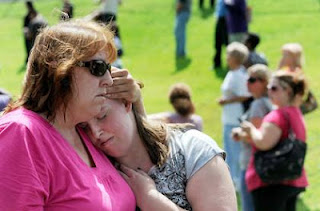 Фото с сайта USA Today
A student from Perry Hall High School outside Baltimore is in custody after a shooting today, the first day of school, of another student, WUSA television and other news organizations report.
The injured student was flown to a shock trauma unit, and the student's condition is not known, but there are unconfirmed reports the student was shot in the back, according to WUSA.

Baltimore County Police Chief Jim Johnson released details of the shooting during a press conference with reporters, according to WUSA. The details are as follows:

The 15-year-old suspect entered the Perry Hall High School cafeteria at about 10:45 a.m. ET brandishing a gun. As a teacher moved to grab the suspect, he managed to fire, hitting a 17-year-old in the back. A second teacher joined in the assist and a shot was fired, though no one was hit.

"I saw the kid shooting, then the teacher tackled him," 11th-grader Gerald Roman told WJZ. "The first row started running, then the second row, then everyone was running."...